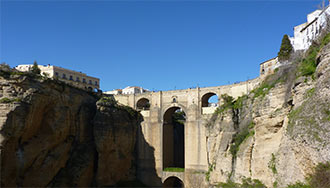 From southern Spain’s battered Costa del Sol a serpentine roads loops up and up into the Sierra de las Nieves. After the best part of an hour, by which time you’ve negotiated dozens of heart-stopping arabesques, you at last drop over to the northern side of the Puerto del Madroño pass. It’s here that Ronda first comes into view, one of Europe’s most spectacular urban inventions.

A line of whitewashed buildings fans out along a high cliff to either side of a 100 metre-deep tajo: this is the plunging gorge that Joyce wrote of on the final page of Ulysses. The town came to epitomise the Romantic movement’s idyll of travel and was depicted by the Scottish artist and traveller David Roberts in a series of his most exquisite engravings. Faced with his first sight of Ronda in 1912 the poet Rainer María Rilke declared, awe-struck, that he’d at last found ‘the city of dreams’. More than a century later the town still retains an undeniable Xanadu factor.

I first visited the town on two wheels in the late seventies. I’d bought an old, three speed push bike in northern Portugal with the idea of riding south through the cork forests to Cabo Sao Vicente: after all, I’d just missed the last bus of the day. I was so taken with life in the saddle that I rode on, crossing Spain via Sevilla, Granada and Almería, sleeping in olive groves, hilltop castles and abandoned farms. Laurie Lee was my mentor, the open road was beckoning and Spain had the allure of an exotic femme fatale. Three nights in Sevilla, drinking cheap red wine in crowded bars and stumbling across impromptu flamenco song and dance could only reinforce that impression. Leaving the city in the early morning I was in high spirits as I wound my way via pot-holed roads through gently rolling countryside, through fields of wheat, sunflowers, lentils and cotton. But by midday my eyes began to make out a series of blue-violet hills rising steeply up to the east and I realised that I was heading, quite literally, for ‘them thar hills’. They’d be my constant companion for the next 300 miles and I’d just made gained my first, fundamental insight to Andalucía: there are mountains, and pretty high ones, nearly everywhere.

Nothing had quite prepared me for the magnificence of the terrain through which I was puffing my way, following the route taken by Washington Irving in the 1840s. Arriving in Ronda, looking out to a cirque-like panorama of jagged limestone peaks, I was struck by the narcotic thought that I might one day set up home here. I knew for certain that I had to return and explore this wild swathe of sierra. But the next time it would have to be on foot: a three-speed sit-up–and-beg bike and 3500-foot passes are uneasy bedfellows.

First came a series of escapades, alone and with friends from university, with each trip leaving me wanting more. Every new path explored seemed to suggest half a dozen others whilst the villages that they connected – the Pueblos Blancos or ‘white villages ‘– were as beautiful as any I’d come across in Europe. So a year after graduating I sunk all my savings into buying an old tile factory in a tiny village west of Ronda. Montecorto felt like stepping back in time: the women still washed their clothes in the water channel, there was just one phone in the village whilst the nearest bus stop was a 2km hike up to the ridge top road that connected the sierra and Sevilla.

With each new path discovered I felt more connected to my adopted village and country. Many were ancient drover’s paths, transhumance routes linking the flatter farmlands round Sevilla and Jerez with the summer pastures of the Grazalema and Ronda mountains. Others followed the course of the old Roman roads whilst a number had been built during the Moorish period by Berber shepherds who had settled the mountains of Andalucía, that so resembled those they’d left behind in North Africa. Then there was the intricate web of footpaths that linked these high mountain villages with local market towns like Ronda, Ubrique and Jerez. But these ancient byways were often all-but-lost, overgrown with dense briars or ploughed back into fields in order to gain an extra few metres of land for cultivation. Local people no longer walked to market, as they’d done just 40 years ago: now there were cars and buses, whilst any livestock to be traded would be loaded on to a lorry.

Many was the time I set out in search of what looked like a perfectly defined path on my old, military maps to quickly find I’d strayed off piste. When I questioned villagers as to where the paths might run, and if they were bona fide rights of way, everyone seemed to know of them yet none would know of their exact location. But that was when Andrés Duarte stepped into my walking story.

Andrés was a bright-eyed and kindly shepherd who had grown up in a village south of Ronda. We soon struck up friendship: he would come every day to the spring that rose behind my home to replenish his water bottles and to throw down grain for the chickens and bantams he kept in small pen next to the gurgling water. Andrés had never learned to read or write – he signed documents with his thumbprint – yet he was one of the wisest men I’ve met. When I told him of my misadventures and wrong turnings he said, in his disarmingly direct manner, ‘I’m a shepherd and I know the paths. And I will show you them all’.

So began a series of excursions with Andrés that will always remain a treasured memory. Often the footpath I’d been looking for would be just yards from where I’d intuited, but would be completely hidden from sight by a thick stand of greenery. At a point where I’d stumbled forward to become lost in dense undergrowth, Andrés would show me how the path looped back on itself in order to pass by a spring or an ancient oak with sweet, roasting acorns. He’d tell me which plants were edible, which grasses could be used to make espadrilles and had a tale to tell about every isolated farmhouse. He spoke of the bandoleros who worked the passes through of the Ronda mountains, of Republicans and anarchists who took to the hills here during the Civil War and told me Lorca-like stories of unrequited love and its often tragic consequences.

With Andrés as my compañero the Andalucían landscape came alive in a way that it could never have done without his anecdotes and folklore, and that deep knowledge of Nature and the seasons to which only a shepherd, or a person who lives a large part of his or her waking life out in the hills, can be privilege. Andrés is no longer around yet when I take people on guided walks through the Grazalema and Ronda mountains he’s still very much present when we talk about the animals, plants, farms, mountains, streams and springs we encounter along the way.

Guy Hunter-Watts is the author of ‘Walking in Andalucía’ and ‘Coastal Walks of Andalucía’. Newly revised editions (2016) of both books are available from Cicerone Books.
http://www.cicerone.co.uk/product/detail.cfm/book/802/title/walking-in-andalucia#.V9fPWIWbGHk
and
http://www.cicerone.co.uk/product/detail.cfm/book/803/title/coastal-walks-in-andalucia#.V9fPhIWbGHk

Where Sierra and Costa meet: The Coastal Footpaths of Andalucía
Scroll to top